The NYC Anarchist Book Fair was founded in 2007. It is the largest annual anarchist gathering in the US, bringing around two thousand anarchists, anarchy supporters and curious together in New York City every year since its foundation. The book fair and related events offer a space for the anarchist community, bringing together activists, scholars, artists and individuals. It also offers an opportunity for the curious to learn about anarchism tradition, philosophy, praxis and the anti-capitalist struggle.

Each year, the NYC Anarchist Book Fair hosts over 60 exhibitors including publishers, writers, designers, artists, musicians and other activists.

Judson Memorial Church, at the south end of Washington Square Park — the neighborhood that is one of the birthplaces of the anarchist movement in the US — has hosted the NYC Anarchist Book Fair nearly every year and will do so again in 2019.

We are a diverse group of anarchists who believe in the importance of keeping anarchist memory, tradition and ideas alive and growing. Our anarchy — the work we do, the organizations we participate in — is as varied as New York City itself. In the fall of 2006, a New York Metro Alliance of Anarchists (NYMAA) working group was established to discuss planning an anarchist Book Fair in New York City. Years of successful Book Fairs in San Francisco, Montreal, Baltimore and Toronto (to name just a few) made planning a Book Fair in New York City, with its large thriving anarchist community, a logical step. The first NYC Anarchist Book Fair was held in 2007 and we have been growing ever since. Inspired by the week-long Anarchy Celebration in the San Francisco Bay Area, we organize and help promote events around the Book Fair that include performance, music, film, readings and a wide range of workshops and panels.

We are always looking for more people to participate in the organizing of the next Book Fair. The success of our events depends heavily on a continual influx of new people, voices and ideas. It is never too late to join! If you would like to help out with this year’s Book Fair or are interested in the planning of next year’s Book Fair, please contact the collective at nycabf@riseup.net

LEARN MORE about the NYC ABF!

Published in 2016 by AKPress, Incendiary Thoughts includes essays from friends and partners in Greece, Spain and the NYC community as well as pictures, posters and more!

Click on the cover art for more information or to purchase a copy from AKPress! 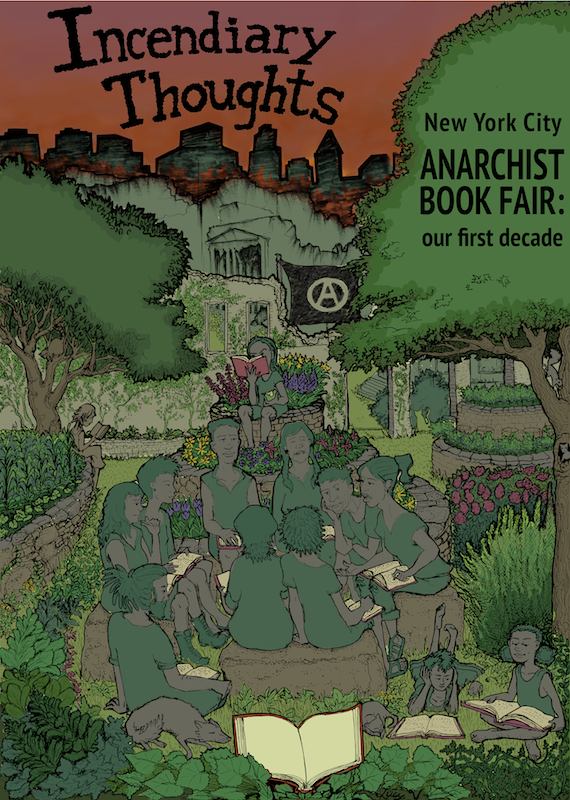